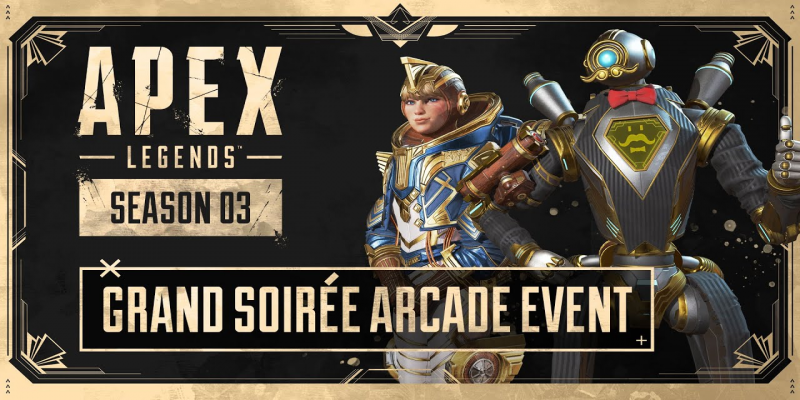 "Welcome to the Grand Soirée Arcade Event! Kick off the decade in style with seven limited-time rotating modes. Experience returning classics and newfangled additions, with a new mode every two days. Earn fabulous rewards with our new Challenge Scorecard and dress to impress with Art Deco-inspired cosmetics from the shop. We hope you enjoy the games!" Let's take a look at the update details and decide if it's worth playing!

As we can assume from the reveal trailer, during these 2 weeks, Respawn will introduce a new mode every 2 days. The Gold Rush Duos offers you to play using only golden weapons that perfectly match the baroque atmosphere of the event. Armed and Dangerous World Edge features limitations for weapons. You and your team members can use only sniper rifles and shotguns in the mode.

The biggest surprise to this day was the Third-Person mode, in which the original 1st person perspective is blocked. Although the feature is classic for other games, it's new to the Apex Legends setting and feels really exclusive in combination with multi-dimensional mechanics and firm Titanfall-inspired dynamics.

The rest of the mods will let you play on the King's Canyon map at night, fight hordes of colorful angry dummies, race with an uninterruptedly closing ring with unlimited on-the-spot spawns, and more.

Have We Seen That Before?

In fact, two of the presented modes, including Armed and Dangerous World Edge and King's Canyon After Dark, have been already introduced in the previous seasons. Nonetheless, the other 5 are totally original, so don't hurry to blame the developer. Dummies Big Day that comes on January 22 reminds the Playground mode from Fortnite Chapter 2 a little bit. Compared to other modes, it offers a more relaxed experience so that you can take a break between two stormier acts.

The list of new cosmetics includes detailed outfits that fit the style of the Grand Soiree Arcade Event. They also provide linked reward-based quests that have enough potential to entertain players for over a month after the initial event.

Although Grand Soiree is a huge event with plenty of new content to experience, it seems to be nothing more than the goodbye session before the long-awaited Season 4 launch. Believing the leaks, we can expect new characters and weapons alongside the battle pass. Do you enjoy the Grand Soiree Arcade even? And what do you expect from the next season? Share your thoughts in the comments below, and don't forget to share this piece with other players.