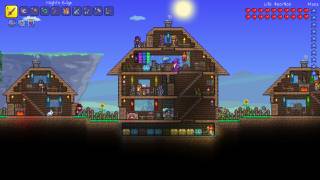 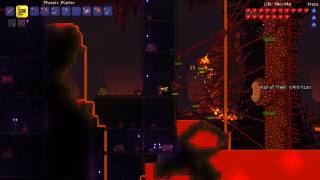 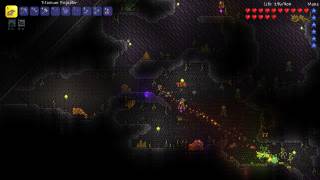 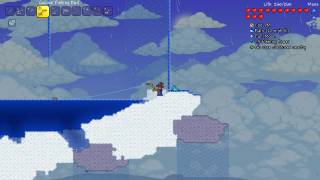 Terraria is a 2-D side-scrolling sandbox action-adventure and construction game created by indie developer Re-Logic and published by 505 Games. It was originally released on May 16, 2011. It can be purchased from Steam, Xbox 360, PlayStation 3, iOS, and Android for  $9.99.

It is a sandbox action-adventure game that combines elements of action, adventure, and construction. It's sort of like Minecraft, but with more RPG and aggressive monsters. It also incorporates a day and night cycle, in which, enemies become more aggressive and stronger at night. It also has a steep learning curve, which makes it difficult for some people to play.

The gameplay is fairly simple. You start a new world with nothing and explore the depths of the world you are in. You will find materials and items as you explore underground. You can use these materials and items to build new things and make your character stronger. You can build whatever you want, but you need to have the right materials to do so. You can also build a house and a farm. You can even build a sky base. You can make weapons to defeat the monsters that spawn at night. You can also place traps. You can also build statues and monuments to make your world look more attractive. You can even make a mushroom farm.

As for the graphics, they are pretty good. They're a bit cartoonish, but they look nice. The game looks similar to Minecraft, but with smoother graphics and better animations, also, it is 2D. The game may look pixelated, but the work developers put in lights and fluids mechanics is very impressive, so overall, the game looks cozy and good.

Terraria replayability is very high. Not only you can play this game again and again in different ways, but also Terraria has a great variety of mods you can install to diversify your gaming experience. There are all kinds of mods, content mods, life quality mods, etc, etc. You can also download your favorite Terraria worlds created by the game players on the internet and play them. That's a lot of fun. Terraria is a great game.